The Hearth Platform (www.hearth-platform.org), Earth and Art, together with  the Cultural Association SabinARTi, in collaboration with the municipalities of Montenero Sabino, Casaprota and Mompeo, present “SINCRONICA”, by Paolo Vanda.

The initiative follows “Momento 01“, the initiative focusing on climate (in Sabina, September 20th  -26th, 2019, during the Global Climate Strike) and “Momento 0.1.1“, a roundtable discussion on architecture and territory (November 7th, 2019, in Collelungo Sabino).

The artist Paolo Vanda presents, in the three municipalities of Sabina, Montenero, Casaprota and Mompeo, six art-works: he paints on the paper, then he cut it into pieces, as big as the hand palm, and he finally staples them together, coming up with suggestive compositions of about 200 x 250 cm each.

Through the use of the stapler, the paper is twisted and tilted, and the three-dimension paintings look like a landscape with mountains and valleys.

The topics emerging are Fragility and Vitality.

The Fragility of the paper itself as a material, cut into many small pieces, but which in the end, reassembled, comes back to life and form, Vitality, in a new and different way, in a colourful and lively work.

As history shows human beings are fragile, yet they are always able to catch up, together with others, pulling the pieces together, with a new strength.

In the Japanese tradition, in fact, the chance that made the object broken, and the kintsugi, bringing it back to life, makes it different and unique, and also valuable because of the precious metal decorating them.

“SYNCHRONIC” expresses with the artworks the complexity of the human being, in his continuous possibility to recreate himself, in an original and unique way, in different places, synchronically.

Paolo Vanda (1975, Rome) started the artistic career as a reportage photographer, and presented its works in various exhibitions and during the Rome Photography Festival.

Since 2012 he has pushed his personal research beyond the boundaries of traditional photography, through projects exploring the poetics of color, while investigating new and atypical ways of creating images.

Experimenting with irregular uses of different techniques and materials, from oil painting to collage, digital tools and printing techniques, in his works Paolo Vanda pursues the a playful and transformative approach, to discover the unexpected.

He recently showed his works during the Festival Photo España, Descubrimientos section (2017) and in the solo exhibition “Bubbles” at the CityLab971 gallery (2019). 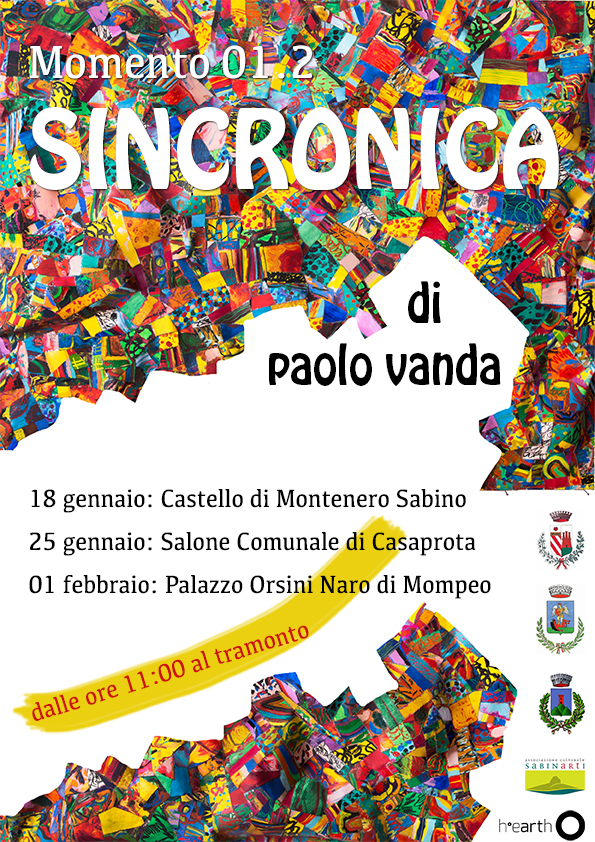